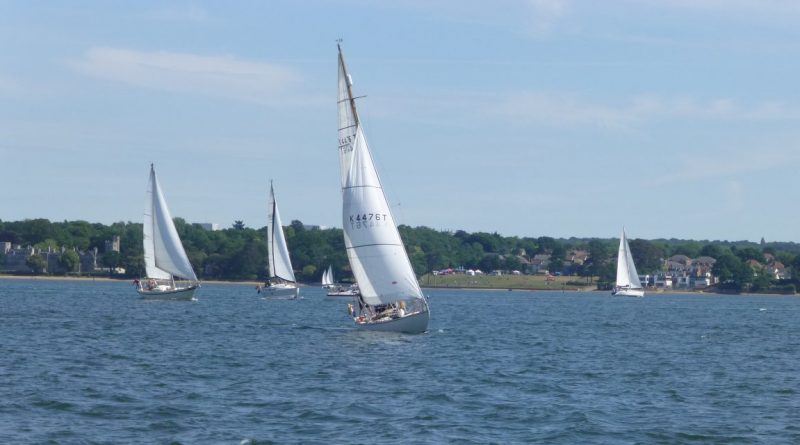 Saturday 1st June proved to be a perfect day for some competitive sailing.  With racing starting on time at 11.00am, a clear blue sky and force 2-3 wind made it tee shirt sailing.  This was a 2 race day as careful timing on the tide allowed the cancelled BD1 race from 18 May to be run immediately following the scheduled BD2.

These races combine both Hythe Sailing Club summer series and the SWSA Bert Drought series with all 8 entries racing against each other on the water.

In BD2/HSC Summer3, a brilliant start on port tack saw Kalabalic (Dehler 33) take an early lead of a couple of boat lengths from Enigma (Mystery 30) with the rest of the fleet fighting for position on the first beat.  On the third leg of the race, under spinnaker, Enigma pulled through Kalabalic, only to be reeled in again on the long beat to the finish at Dean’s Lake buoy with Kalabalic taking line honours by 1 min 15 secs.

Close racing in the whole fleet put Dreamweaver over the line 17 secs ahead of Bel Ami, and Fidelio just 39 secs later.  An interesting battle with Dreamweaver being a Clarke Mills classic 33 footer and Bel Ami a Beneteau 21.1.  Both flew spinnakers.

Full results to be found at www.swsa.org.uk

The rescheduled BD1/HSC Summer 2 was sailed in fresher winds with the ebbing tide setting in and giving an advantage to being in the deeper water for the beats.   2 full laps of the course were completed with the first 3 boats finishing in the same order as the first race though the gap between Enigma and Dreamweaver was halved.   The fresher wind clearly proved more challenging for the lighter boat Bel Ami which finished 4 minutes behind Dreamweaver and allowed Blue Mist a simply beautiful UK Folkboat to cross the line in 4th place.

On handicap the results looked very different and can be found on www.swsa.org.uk